How Is Withmore Physically Structured?

Login to post. Membership required.
Jump To
Newest Post
So, I'm a little confused about the physical arrangement of Withmore.

I understand us to be in a domed city with (at least) four levels, Red, Gold, Green and Blue, in ascending order up from the ground. There's an artificial sky on the inside of the dome and an artificial sun.

I have some questions/difficulty visualizing things, though:

- Is there one artificial sky for each level, or one for the whole dome?

- On Red, can you see the actual top of the dome, or just the bottom of Gold?

- If there's only one artificial sky, what percentage of the sky does the bottom of Gold take up / how much of Red is in perpetual shadow?

Mostly, I'm trying to visualize what the cityscape actually looks like. I wish I was an artist where I could sketch out the general arrangement of the Dome, but I'm not!

In my head, the levs spiral around and upward, since they travel between the different stations of the different sectors.
By DizzyAtraxa at Dec 17, 2019 1:46 PM

One detail that's a bit hard to pick up is that it's hundreds of stories from Red to Gold. To me this suggests that a bit of Dome might be visible above Red skylines, with the underside of Gold blotting out anything higher than say 1 or 2 degrees above the horizon.

And then I just imagine the situation being progressively more airy and open as you go up the levels, with Blue having an unobstructed Dome above. I'll leave whether the Dome is transparent/translucent or not to IC exploration.

honestly, for the longest time I thought gold was above green because of the supposed skyscrapers

my guess has always been that the maglev's and express tubes spiral up the sides of the dome, but I otherwise just don't think about the rest

Red is on the ground. Gold is more than a skyscraper's height above Red. The platform Gold is built on is NOT a solid disc, you can see through a lot of it as there are big gaps in it, and it doesn't reach the edge of the Dome in all places.

That means there are places on Blue where you could theoretically throw a rock off the edge of the platform and have it land down on Red somewhere. All four levels are far enough away from each other that skyscrapers fit in between them.

The holo-sky is not projected against anything. Holos are 3D and a matter of perspective. I imagine the "sun" is probably located above Blue and Red is therefore very dark most of the time, but remember there are also floodlights and heat lamps to help simulate the daylight.

I look at the upper levels like an array of spiderweb like skywalks with platforms for large structures. The dome, with its single sky in my mind, is a superstructure that was built with topsiders in mind (naturally). The superstructure blocks some of the sky, but since the Dome is literally a megacity in size, and the upper levels are hundreds of feet (at least) above, it's probably not a terrible burden for the mix. Large swathes of sky are still viewable at any given time, and where the superstructure is platformed, it's so far up that it's just a speck of blockage.

That's how I look at it anyway.

Yeah Ratchet is right. It makes more sense if you try flying an aero around, but from the street it generally looks and feels like you're on solid ground.

Basically, picture Final Fantasy 7's Midgar with a wok lid on top of it.

I imagine there are huge fake sunlight lamps across the underside of each sector that simulate natural light. Reds probably being in rundown condition, plus there being a ton of smog.
By Slither at Dec 17, 2019 7:03 PM

I remember reading flavour texts that said a holographic sky is projected on the underside of each level, along with the main dome sky.
By Baguette at Dec 18, 2019 4:03 PM

Yeah, I sort of imagined it as it's only projected on the parts of the underside where there's actual shit in the way. Things like skywalks and the spaces between them wouldn't be covered, allowing you to look up at the platform above.
By Baguette at Dec 18, 2019 4:06 PM

Withmore City is at least 17 miles in diameter, and for the sake of convenience let's just assume it's a semicircle dome, meaning it's at least 8.5 miles tall. Assuming each level is equally spaced, there's 2.125 miles between each level, or ~3.420 kilometers. I'd say projecting a sun on something that high up would work pretty well.
By Baguette at Dec 18, 2019 4:16 PM

2 1/8 mile between levels would necessitate a seal between levels, as the air pressure would not sustain life on green and higher (19,520ft is considered the highest possible permanently habitable elevation) . It's more likely a saucer dome, with the top of the dome near a mile high. The different levels also do not need to be equally spaced, as vertical building is necessary on only the densely populated levels of red and gold, while green and blue are luxurious enough to focus more on horizontal space.
By RedSteelButterfly at Dec 18, 2019 6:48 PM

What Butterfly said, it would have to be a lower dome. There was a discussion about this a while back somewhere on the forums but the tallest building in the world is 2717' If each sector was 3000' it would be habitable at 12,000' and still taller than the Burj Khalifa.

With that said, this distance doesn't work for a game environment so our dome is more about the size of the Chrysler Building.

There's skyscrapers and then there's Burj Khalifa. In any case, even with the peak of the dome at 20k feet, that's still almost a mile between levels evenly spaced. You could have the top of the dome at 10k feet still fit some pretty tall structures in.

As to the dome being pressurized. you could still run into the problem of higher altitudes. Pressurizing the dome doesn't negate it being an air column.

Assuming the dome is 8.5 miles tall, it would just begin to go into the stratosphere, and just above the average cruising height of most aircrafts. I would say that if the dome was entirely pressurized, and had it's own source of oxygen, and that it runs it's own climate and weather, this should be entirely possible. Burj Khalifa is pretty damn tall, but the year is 2104 in SD, so megaskyscrapers dotting Red and Gold wouldn't be out of the question, especially given how cramped both of those levels are.
By Revex at Dec 18, 2019 7:13 PM

The measurements are never going to make sense and this is going to rapidly get into Trekkie convention levels of geekery over stuff that is purposefully left vague and could never be answered for all the contradictions. 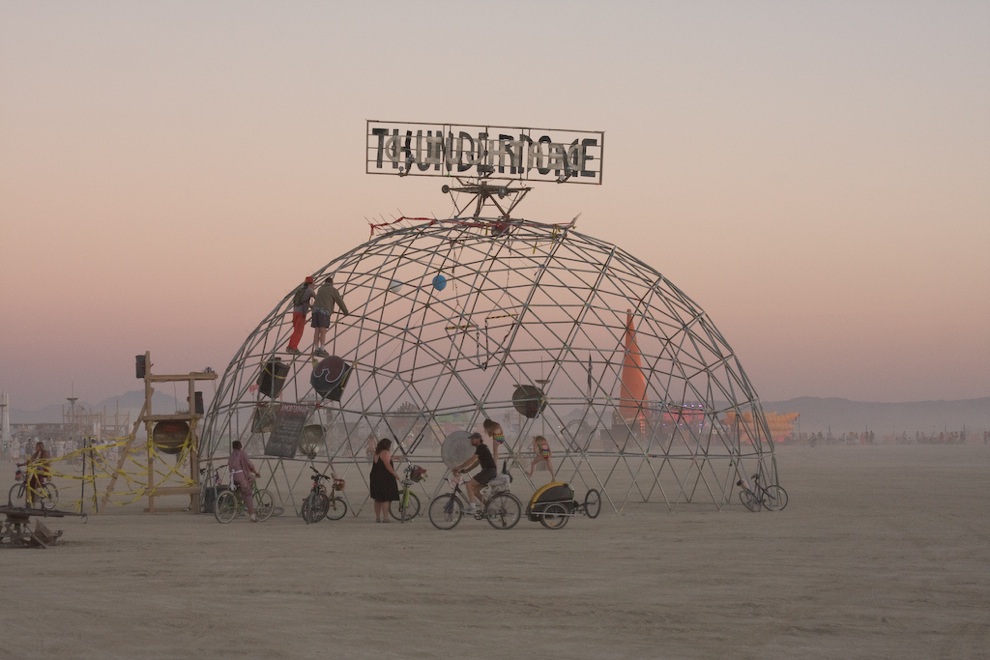