Cyberpunk is more than a game, in fact its not. It's an entire genre of science fiction that artists, writers, designers, gamemasters, and other creators have embraced. Cyberpunk is a dark vision of the future. 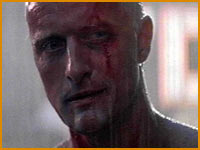 Cyberpunk is always very descriptive in describing the world in which its characters inhabit. The difference between the haves and have-nots is always huge. The rich arcology living 'suits' live a life of luxury while the streets are filled with crime, disease ansd general chaos. The struggle is not just external though. The cyberpunk world is full of technological extremes and the line between man and machine is often blurred to the point where it vanishes.

Our world is just one of several that follows the cyberpunk theme. Movies, novels, music, websites, games and other works of art are all related. We've gathered a comprehensive list of these resources. We review most of them and highlight our favorites. If you don't see something you think belongs here, suggest it to us.

'Recombination' is the first book in the 'Chronicles of Withmore City' series. Set in the dystopian future of 2085, mega-corporations control almost everything and destitute governments are fighting a losing battle for relevancy. Human cloning and brain mapping has been perfected, making death a mere inconvenience for the lucky minority wealthy enough to afford a clone. A new religion has sprouted up around human cloning, backed by the corporations that hold patents on it. Life teeters towards those with wealth and power, while those without reluctantly work as near-slaves for the corporations, in exchange for the scraps they are expected to survive on.

Nightcrawler
written and directed by Dan Gilroy
Jake Gyllenhaal stars as Lou Bloom, a nobody scraper looking to move up in the world. He latches onto shooting footage of accidents and crimes in Los Angeles and selling it to news channels as his way to a better life. The news is hungry for more blood and Lou knows just what kind of shot is perfect for real money. This movie is great inspiration for any players interested in reporter or journalist type characters in a cyberpunk setting.

Playing as an undercover police officer, you must survive and make compromises of morality in a very mix like dog eat dog depiction of urban life. It's very indicative of the stories that might be told within Sindome's broader more futuristic scope. The game itself exemplifies a fast past brutal style that fits in almost perfectly with the stylings of Sindome.

Search
More Inspiration
What is Cyberpunk?