Login to post. Membership required.
Jump To
Newest Post
I am an absolute lover of movies. Cheesy, comedy, action, sci-fi, drama. Sindome needs movies. Even if we don't have the movies, lets talk about what movies there'd be!

Brainstorm / Riff / Remix the world of movies that would have been made between the year 2000 and the year 2100 in our timeline.

RoboJudge: The Mix fight back. - The story of a lone WJF judge who was augmented beyond anyone's expectations of what was capable and is now forced to fight to bring law back to the Mix after it is overrun by the Hairy Frog Gang lead by the infamous "Jerry JockStrap".

MixBoy (Get it? Instead of HellBoy?) - A movie about a dude who got infected with some weird toxic stuff when he was young and now he has super powers and everyone hates him because he has three eyes.

Dude, Where's my mixer? - A comedy about some Corporate citizens going on adventures and losing their Mix Slaves after they are stolen by some other Corpie's.

and my personal favourite:

I am the Laawwww! - A movie about a man who shouts "I am, the LAaaaAAaWWwWwwW" over and over throughout the entire movie as he fights back Mixers while bringing justice to the planet.

I like to think that in our timeline, the events made movies darker, more blunt and fatalistic on the whole. So franchises that had already begun, continued, but with some twists.

The Federation - a series of movies based on the old Star Trek franchise, sometime in the mid 22nd century. Fed 10 featured an epic all out assault on the Klingon home planet, Qo'noS by the Federation armada. 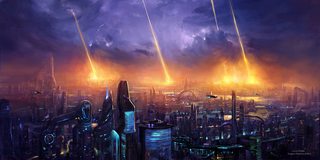 Summary: A low budget cult classic produced by a bunch of wannabe producers. They hired actual console jockeys to help with presenting Grid hacking as realistically as possible. This was the vid's downfall, as only deckers enjoyed it, and others found it unbearably dull.

Story: A feature length vid about a group of slum dwelling deckers trying to make a name for themselves and get out of the projects. They unite forces in an attempt to break into the largest, most secure datavault house in a Vulture Corp facility.

The majority of the vid is spent watching a bunch of kaf slurping punks complain about the Grid and its flaws, and eventually the vid ends abruptly with them being traced by a Vulture Corp NetSec team and being blasted to bits in meatspace.

Trivia: Armagriddon 2.1 never made it past development hell.

Apparently part of the golden age of '70s experimental cinema, 224 is a two hundred twenty-two minute long surreal holo-vid without any dialog and a very spare score. The film centers around a middle-aged woman seemingly trapped alone in an empty city stuck in a neverending sunset. Over time, she begins experiencing delusions that grow more intense until the film's end.

There is no real resolution to the plot. The woman sees but never meets distant shadowy figures, and it is unclear whether many of the events of the film are real or imagined. Though it is of major studio quality, the movie is entirely uncredited and speculation abounds among underground collectors as to who shot, directed, produced, or stared in it. The film had no legitimate release and is only traded via bootleg.

A schlocky action comedy from the late 2090s where a partnered pair of slacker corporate security agents discover a major internal conspiracy that threatens the future of their pharmaceutical megacorporation, but more importantly, it threatens their cushy jobs and their access to near-limitless stickiest of sticky TH-2C.

The film is a two hour romp of drug-fueled bullshit shenanigans as this barely competent agent duo manage to bungle their way through each encounter.

Reminds me a lot of William Gibson's novel Pattern Recognition.

A highly-dramatized 'documentary' vid of the Sinarcian space-plane hijacking and habitation of the Konstantanov space station. A commercial success, the vid featured as many box-office stars as it did historical inaccuracies. Panned by critics for it's over-the-top performances and complete lack of realism, it did go on to win several awards for it's soundtrack and special effects.

Super hero movies, and all the merch they sell, would be in. The story of a nobody that a corp accidently turned superhuman would be a mixer favorite. A billionaire who reluctantly turns hero by decking himself out with the best armor and cyberware would be admired by corpies. The anti-hero is an obvious archetype but I also like the idea of a movie featuring a hero with impeccable moral character being played by an actor who is blatantly or secretly the opposite.

Documentaries exposing wrongdoings would be out. They might even be illegal (as defamation) and destroyed when found. A corporation might secretly produce one about a rival and distribute it in the black market but most people would probably be too miserable or disillusioned with their lives to care.

Also if it's 2012 and I'm going out to see something in a theater it better be a high-fidelity holofilm.

A fictionalized 'documentary' about a man guiding two people into space, and through a series of barren worlds with mystical, magical anomalies. He is called the 'Guide' and shows the 'Professor' and 'Writer' a side of space they didn't know existed, unto a series of eerie craters called the 'cradle' a place which is rumored to grant one's innermost wishes (but that's the catch, it won't grant what you say you want, only what you truly desire). In the end, the Guide is revealed to be a man who simply delights in the wonderment and hope of others. He has grown an addiction to seeing hope in the eyes of the disenfranchised and would bring anyone to the cradle if it meant he saw it again.

The Professor turns out to be a man bent on destroying the cradle with a hidden bomb, believing that somehow someone exists in the known galaxy with enough hate in their heart for mankind that their innermost wish would kill everyone.

The Writer, seeming at first cynical and jaded, selfish and snivelling appears more in tune with this place then anyone, and at the end dons a crown of broken wires as though he were aware the irony of how untouched by the mystical dangers the anomalies presented the other two with.

In the end the bomb is discarded, and a shaken Guide, Professor and Writer return to their lives without truly entering the cradle's inner sanctum, not knowing whether or not the rumor behind it granting wishes was actually true.