Gender and sexual fluidity in Cyberpunk
Looking for sources.

Login to post. Membership required.
Jump To
Newest Post
I have heard variations of, "Gender fluidity and sexual fluidity has been an integral theme in Cyberpunk since inception," come up more than once in threads and I have to admit it leaves me curious.

I've read a lot in the genre. Gibson, Dick, Sterling, Morgan and others. I have watched a lot of straight up Cyberpunk films and films that pull from the genre. And I honestly can not recall instances where gender and sexual fluidity was a focus.

Now I am wondering what I've been missing. I was hoping that you all could point the way to these books/movies/series/comics/whatever. I would really like to look into these stories!

Only thing I could think of was when the protagonist in Altered Carbon gets sleeved into a woman's body to be tortured. Rough scene.
By JMo at Oct 17, 2019 12:08 PM

A recent example I can think of is Altered Carbon. If I recall correctly, there are characters that resleeve into whatever gender is convenient at the time, and it does not greatly alter their sense of sexuality (I.e. they and their partners don't care which body either is in.)

I could be misremembering though.

https://www.cbc.ca/books/why-joshua-whitehead-wants-to-recentre-indigenous-characters-with-his-cyberpunk-infused-poetry-1.4360505
By Beepboop at Oct 17, 2019 12:09 PM

I'd like to point out that Altered Carbon (despite the awesome netflix renditon) is going on 18 years old now. This is not a recent development, the book was published in 2002.

Grey0, I'll get you some citations when I get a chance to make a proper post to do it justice.

Yep. That counts. It didn't feel integral to the story though. I was happy it was in there as it was yet another aspect that the unique cloning tech available in that world that was great to explore and think of. Already consumed all that content though!
By Grey0 at Oct 17, 2019 12:11 PM 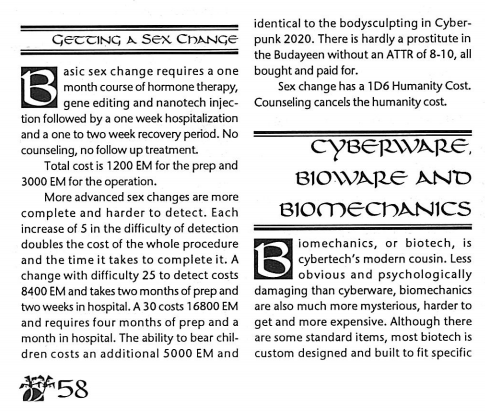 So it's been a long time since I read it, admittedly, but didn't Gibson's trilogy also have same-sex couple conception, not to mention the protagonist jacking into Molly and experiencing female sex vicariously? I could be mis-remembering things.
By TalonCzar at Oct 17, 2019 12:22 PM

Oh, right! Yeah! Molly. She was a sex puppet for anonymous strangers to jack into to have sex 'as' her. That was an important part of her story arc. Being able to deck into a female body and have sex with Johns and then jack out is ultimate sexual fluidity!
By TalonCzar at Oct 17, 2019 12:26 PM

https://medium.com/@ranibaker/is-every-woman-here-a-sex-change-trans-in-cyberpunk-rpg-362cfbb4451f A bunch of tabletop and literary examples for starters.

Billy Idol is a classic example of someone subverting gender expectations. He was certainly a male icon in his heyday but he was very feminine and highly sexualized in his presentation. He's what I think of whenever I see someone with the femboy shortdesc.

You can see similar themes of gender and sexuality in other works Sindome draws from. Lord Humungus in Road Warrior has two sections of his army called smegma-crazies and gayboy berserkers, and there's no shortage of twinky dudes, dykey lesbians, or trans characters in similar contemporary media. Look at the new romantics, the punks, the goths.

Part of that back then was the sleaze factor. CP happened during the AIDS crisis and the down-and-out youth culture that inspired writers like Gibson was chock full of dykes, crossdressers, trans people, and queers. Where do you think all the CP fashion comes from? :P

IRL, gender's where we're taking our first and biggest steps into transhumanism, one of the biggest themes in CP. People are not only swapping sexes, they're creating and defining their own, whether through medical innovations or social expression.

Most of the mods and cybernetics you can get in the game have a mechanical purpose, but most people don't need to be able to shrug off bullets or jump over cars - the vast majority of money is probably being spent on things everyday people want. It's not hard to imagine the possibilities.

Ah, another. In the Ghost in the Shell mangas, Matoko's sexuality is one of the things that she explores often. She bounces between having physical sex with both men and women, as well as all kinds of kinky virtual sex with her partners. If I recall correctly, part of this exploration of what it meant to be human that she is doing is what attracted the AI to her, which she, in essence, copulates with to produce a new entity altogether.

Later in the animated series, there's some callbacks to her gender explorations in the manga, as she explains that never having grown up and experiencing adolescence as a human (being one of the very first full-body cyborgs in the setting) that she's constantly searching for meaning and connection with other people, often questioning even if she is human, and not some AI insterted into meat.

Mind you, almost all of this was cut out of the original publications due to censorship when it was first published stateside, and later on, I think Dark Horse acquired the rights to the manga and started publishing the unedited versions of the manga. Point being, that gender identity is one of the explorations of the protagonist in a key work in the fandom.

This article is a trip because it has so many parallels to what we have been talking about in this thread.

Gays and fashion and cyberpunk and influences and music.

What trips me out even more is that Google is so up in my business that it recommended this article to me on my newsfeed.

A Sindome PC was cloned into an opposite gendered body and was forced to live out the dysphoria of the experience. Not sure exact year, maybe 10-12 years ago? I don't know how well known the IC story is.
By Johnny at Dec 3, 2019 8:30 AM

That sounds like an incredible opportunity for some creative writing for a character. What a great RP prompt!

Off that, your character could go:

>Hardline anti-corporate anti-Genetek: "I hate what corporations have done to me.."

>Pro-corporate: "My clone data is fucked, but at least VS's biomods can get me mostly back.."

>Mental breakdown/dysphoria: "That's not me in the mirror.."

>Shifting viewpoint: "I used to think XY about AB, but not anymore.."

And those are just a few ideas I can think of off the top of my head. Just to bring it back to the thread title: there's a ton of storytelling potential for gender and sexuality within the framework of CyberPunk as a genre.