Cyberpunk comic I did once.

Login to post. Membership required.
Jump To
Newest Post
Hi! I can't post the whole comic (I don't own the rights), but I will share this bit I illustrated from the script. Figured y'all get a kick out of it. Project fell through due to lack of funding from the writer, but I enjoyed illustrating a comic while looking back on work like Ghost in the Shell and Appleseed.

Thank you! I'm probably going to do another cyberpunk one-shot soon, something with a spaceship and a bit of comedy. I'm on an assignment now for something else but when I complete my idea, I'll share it here!
By Supermarket at Aug 17, 2017 1:32 PM

Sticking this under here because I don't want to spam and make a new thread.

I read about the love doll incident at Ars Electronica and how popular it was. Went digging on the doll manufacturer's site, saw a pic of the doll without her head. Spurned a cyberpunk game idea. Here's basic sketches of that. Inspire the boner, then kill the boner.

It happens. This is a heartbreaking business! A lot of ideas get out there, and then die.

I even had a comic I wrote seven manuscripts for (over years, with a friend), we sold the first book, right? That one did well. Well.. the second project was harder.

I have a printer here in my house where upon completing a book, I print it all, cut it, bind it, and sell it to stores on consignment. We had to have a certain amount of sales to justify everything. This was after we calculated that we must do our own binding to make any decent profit, a third party printer would cut all profit and hurt us.

There are obstacles when it comes to courting media and pitching the book to store owners. I got the news article for the series, right? That was okay and spurned interest. But then our distributor couldn't find anyone in the expanded network that we needed to accept the series. We had a few stores under our belt but we actually needed several more to make a minimum. This doesn't account for eventual reader drop-off.. number 1 issues always sell the most.

When a book does not make those sales... you can't continue. I mean you can if you want to, but it doesn't justify my page rate, I might as well go do commissions or something. When that happens, that's why you see your favorite titles sometimes disappear from shelves, indie or not.

I wrote a series once (for another client) about a world where children had powers and were trained to become pilots in a world where powerless were separated from the powerful. It was a great thing, but the client couldn't pay for the rest of the work, so that too died. I had people messaging me asking what the end of the boy's story was. That was when I truly realized the power of what writers do.

Anyway! The series that own will eventually get turned into a book, and I'll probably do one-shot cyberpunk stuff in the future (meaning one issue, short story and the project is done lol). Realistically, it feels as if I can only do things like that moving forward in order to keep ideas going.

Forgot about this one - someone had me write a scifi comic about a kid with abilities. Have/have-nots theme ran through it, and I filled in the rest with lore.

Of course there was the Judge/Robocop reference for police, but also I wrote that if a public trash can was "misplaced" it might indicate a fight starting in an alley: 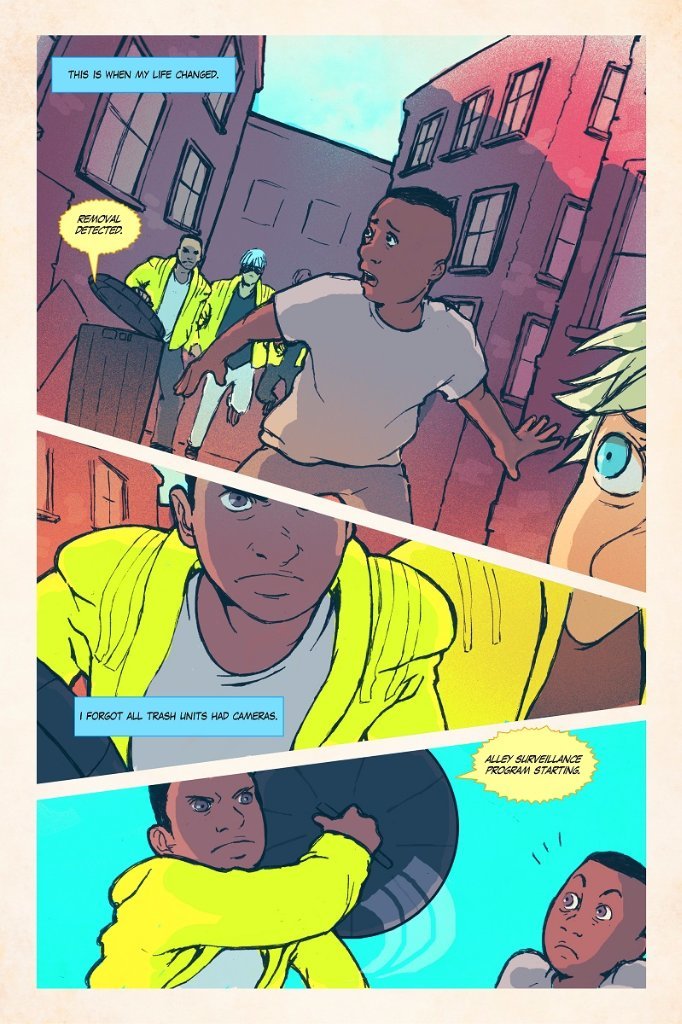