Login to post. Membership required.
Jump To
Newest Post
Making this thread since we can't talk on ooc about it.

If I were the screenwriter, I would have the Night King fly right over Winterfell, captured King's Landing by surprise, raised the dead of everyone Cersei killed with that Sept explosion, turned her into Lady Stoneheart, and have THAT be the big bad that Winterfell faced at the end.

I would've had the Dothraki running off to face a smaller army that would have defeated them easily, everyone wondering what happened...then stragglers coming in from the south in a hurry and begging to be let OUT past the Wall because King's Landing is in disarray and something awful has happened. Then Jon would've realized in horror what the Night King did.

So then they would've had to run down there in a hurry to kill his ass, and all the assassin characters would be leading that charge while all of the armies distracted the rest of the dead.

Cersei and her threat as being the worst monster in the show is great for the end on tv, but it's sort of...fitting together a little too easily for me. I'm worried about the series wrapping up without being satisfying now.

Lady Stoneheart would be a pretty cool addition, if I'm being honest. I like what you said a lot more than what happened.

There wasn't enough info on the Night King. I'd want to know more about the NK. It's also blaringly obvious that the entire combat strategy against the WW was completely BS and had me questioning why are people even alive, in general.

Heading south to capture the dead there and then driving the living north into that freezing, unforgiving Wildling territory would've been brilliant. People not used to the climate would freeze. The dead left behind would become part of the army. Pick off survivors in the cold who don't have time to acclimate and then boom, domination. There also would've been time between all this for a final battle and a chance for everything to wrap up.

Cersei gets her ennui, Dany gets her throne, Jon gets his destiny met, Arya gets to still stab him. What Bran did with warging did draw the NK in, but it just was all met prematurely for me.

There are so many goddamn plot holes as well that wouldn't have happened if they did that. At first I thought that Arya wore the face of an undead to 'sneak' past the army of the undead to shank the NK. Just 3 seconds of her rermoving the mask would help.

Another thing that could happen is having them all fight in Winterfell, then Cirsei just shows up with a shit ton of troops when the NK is defeated and goes "I helped, we won because of me so I'm your queen." then have the rest of the season be about Jon escaping with the whatever people are left to try and break it up from within.

I'd find it so fucking hilarious if Bran simply controls the mountain with his mind trix and kills Cersei. Then the credits roll and season is over.
By SolBro at May 1, 2019 8:03 PM

i like when brienne go aaaAAaaaaAAaaaAaaaa
By HolyChrome at May 2, 2019 8:15 AM

May the Starbucks cup that shows up in the seventeenth minute forever symbolise how poorly the show has devolved in the last four seasons.

You deserved better, Missandei. Hope you and Rhaegal find Viserion in the afterlife and party it up.

Shoutout to Tyrion for showing up like Maury Povich with those paternity hints to Euron though. I wonder if Prince Chicken-of-the-Sea is going to figure it out.
By Supermarket at May 6, 2019 1:56 AM

That's what I thought when that happened too.

It should be a huge red flag to this discount OUaT!Captain Hook (who was also awful) that Tyrion just starts shouting about Cersei's pregnancy.

Varys and him can't even figure out the troop movements of a massive fleet and army but somehow days after Cersei tells him she's pregnant with his baby Tyrion's at the gate and knows?

She's not even showing!

Dany was acting like if someone stopped playing their character but wrote no notes on them, so an admin didn't understand their personality and puppeted them to finish up a storyarc however they wanted to.

You don't burn your labor force! She wasn't even acting like someone on Blue, she was just acting like a mad terrorist. That action proved she doesn't really want or deserve queenship. You take the throne and then, what? Get besieged by building efforts (since you burned it all down), insurrections (because everyone hates you), nobles who now won't lend their houses to support you, tf she expect with that shit, because you lost your friend? You've got thousands of people to care about now, better shove that shit to the side and grieve later!

The only thing good about this ep was Cleganebowl and that was it.

I've never seen a show intentionally tank seven seasons of character development in two episodes to do a complete one-eighty. Nothing in Dany's buildup has ever suggested she'd burn thousands of innocent, surrendering non-combat personnel. Especially women and kids. Nothing in Grey Worm's story has ever suggested he'd murder surrendering forces or lead his troops into crowds that included everyday people as they're murdered, especially not in Missandei's memory.

If you want to flesh this out over multiple seasons, I could potentially buy it. But they did it in two episodes. Because she was grieving and because she wasn't loved as much as Jon. That's the writing these two showrunners who were tired of doing the show chose to conclude this story.

I can only hope that Disney is watching and takes away their Star Wars project. because this is.. a complete disaster of storytelling. Nothing about it is compelling. I actually find it insulting to the actors.

Also wow, what a disappointing death for Cersei and a disservice to Lena Headey who has made her character into an icon with her amazing facial expressions, line-delivery and body language.

Can we also talk about what a little bitch Jon is? Everything is falling apart around him, people are begging him to step up and assert some kind of dominance over Dany to calm her down, and he just hangs his head and follows her around! "I don't waaaant to lead." The destruction of King's Landing is his fault as well, imo, because he didn't try to stand up to her sooner.

Drogo NEVER would have let her get this far.

All the character development went down the drain in a matter of seconds. Cersei had a very retarded ending for all we've gone through, Jaime threw away all his development, and Cleganebowl got cut and Arya mounting a horse in slowmo got more screentime than Cleganebowl. Amazing.
By Rangerkrauser at May 12, 2019 11:39 PM

of all things wrong with this season, i dont think danerys going mad queen was that outlandish though

shes been wanting to take back whats hers for the longest time. gets 3 dragons and goes through hell to gather up the largest army ever and get them to westeros

she gets there, and she realizes they dont love her like that. they think of her as a foreign invader rather than a savior, just another crazy bitch in a long line of crazy ass motherfuckers.

she loses one of her babies (tyrion is the WOAT hand btw, capturing a wight was the stupidest idea). pretty much all of her people get wiped out by the white walkers at winterfell, including one of her most trusted advisors. and she comes to find out that what she thought was hers to claim, isn't really hers at all, because her lover has a better claim

she loses another one of her babies. her best friend gets killed. with all that added up, it's not so far out that she saw KL, the symbol of everything she's ever wanted to have but something that she can't ever truly hold, and just said fuck it. not the most egregious choice given her arc this season

I don't think Dany going mad is all that bad either. The rest of the characters arcs however were stupid as fuck and it feels like characters were given 180 turns just so they could get a death.

All the buildup of eight years was kinda for nothing and knowing the leaked script was real now, I can only say that I absolutely hate the ending they have planned.

I should say I don't mind that Dany went mad. I mind that she did it in two episodes of a rushed and terribly written final season and after seven of her doing her best to make sure the common folk were spared evils. Even when her justice is harsh. If we show her over two fully fleshed out seasons descending into a madness, a darkness where she becomes numb to the every day person, especially in Westeros, that's something I can accept and I think would have been better.

Instead we use get the ridiculous death of Rhaegal (who I don't mind that he died, just.. forgot about the Iron Fleet???? in an episode she's reminded of it beforehand? By Euron's aimbot?) and plot-device death of Missandei used to push her over the edge.

Even this episode could have been done better in that regard to me, personally. Have the bells ring but she takes Drogon to the Red Keep to kill Cersei, burns down the towers around it, innocents die in the process. It shows Dany becoming mad, putting power and vengeance above everything else. More natural to me.

It's just hard for me to accept that she's suddenly, as someone on twitter wrote, "going up and down the city like pac-man" with Drogon on thousands of innocents after a surrender.

I guess it's what happens. A season of rushed plots and writing avalanching into bad decisions to get us to the end.

But I am going to need a Drogon!version of Pac-man now, though.

Also, about Euron's aimbot and the scorpions -- there must be some real superhumans on those ships if they can pull back that bow, place another harpoon and then shoot over and over with enough force to penetrate dragon scales in a matter of seconds.
By Rangerkrauser at May 13, 2019 12:07 AM 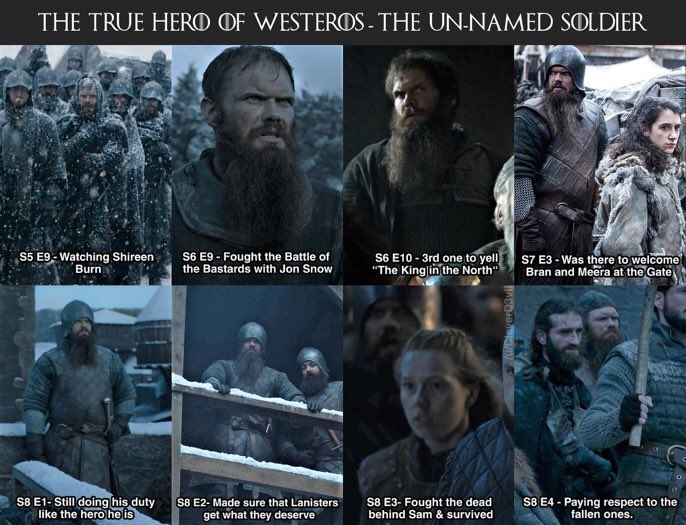 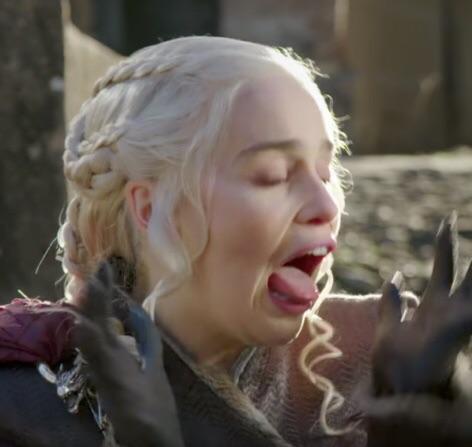