Login to post. Membership required.
Jump To
Newest Post
Many of you have been witness to the changes that are still ongoing this week around jobs managed through the various corporations employment terminals. We're not quite done yet, but we should be soon. :)

As the article in the Globe covered, the employment terminals have received a software upgrade and the corporations have standardized their job systems to a global system that lets them provide their employees with better benefits than ever before! We've streamlined the number of jobs on the terminals by building tiers or ranks into every job's position. No more will you need to be fired and re-hired into your new position just because you've been doing good work and earned a promotion.

As part of this process, many of your characters have experienced a change in job title, a clarification of job duties and possibly an adjust to your weekly salary. If you haven't already stopped by your employment terminal for the week, you might want to check in (your character having seen the news on the feed of course).

We hope everyone finds their new titles (and the documented duties). We realize that for some of you, you can't literally do some of the things your duties might say. Thats OK, some of these duties are forward thinking.

Now, about the perks. Things that were formerly reimbursed for, that now exist as a perk, will no longer be reimbursed for. Instead, the right job positions should have appropriate perks to support them. These perks will not be equally or fairly distributed. Some of you will have more than others. Some of you might not have any perks with your job. Some of you don't get any of this upgrade because you're paid via a character interaction (and aren't some cog in a machine?).

Here's the list of Perks: (why can I share this? because they are ICly being touted by the companies recruiters ... soon)

We're kicking around a few other perk ideas like discounts at specific stores or free lunch.

Oh, an if you have access to your employment terminals management menu, you can promote and demote employees and add new positions based on the new system.

Is there a way yet to see what jobs there are available, what they entail, etc? It would be ace to know whether one's job is dead-end, or whether one department is better for you than another.

We've got some code to update before the goodness of the new jobs system makes it out to the website, but you'll eventually see pages for the jobs that link to the archetypes and help and such, but it'll be a while in coming I think. :)

In the short term, the Newsfeed page will get its jobs list updated first. 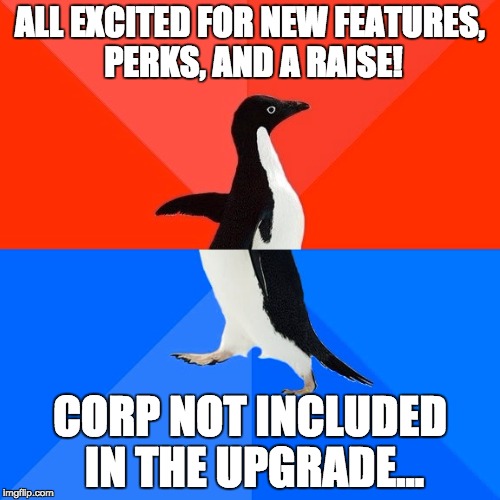 You'll find the archetypes we talk about on our website now list a number of the jobs you might perform for each archetype, including the ranks of the job and the duties of those ranks.

I almost published the salary info, but I thought better of it. :)

YEAY look at all the reasons to viciously claw upwards in life!

Been a bit since we released this. I wanted to check in and see how the Perks are feeling? I know there was some adjustment as people learned a lot of the 'standard' reimbursements were going away in favor of these.

Let me know if your feedback. Do the Perks feel like a mix of replacements for reimbursements and significant benefits? Do you see a path for your character's career?

As always, keep IC out of it. If you need to cross the line to answer my questions, please feel free to email me directly. I'll be putting a poll out for your favorite Perk later today, but please feel free to share your critical feedback now that its been out for a bit. :)

The best part about perks is not all perks are created equal, and picking a job means choosing some degree of inequality. This leads to envy, jealousy, and other negative sentiments which further increases the divide. Anything that calls attention to the social divide adds to the theme of the game and makes jobs feel a lot less like 'that thing everyone does' and more like 'I want his position'. Previously there wasn't a really clear path for 'clawing your way to the top of an organization' or 'making a lateral career move', but now that you can see why the grass is greener, and just how much greener it is, there's more to consider.

One thing I will say, though, is that while they absolutely do provide an opportunity to reduce some of the other perks of corp employment, I would argue that those perks should not be eliminated across the board for everyone. After all, what's the point of being a corpie if you can't be a corrupt corpie?

Oh, reimbursements, budgets and requisitions are all still key parts of the extended resources afforded to various corpies. The growth of the player base and the strain on GMs was meaning a lot more 'busy work' for GMs doing reoccurring, repetitive approvals for rent, fuel and monthly transport costs. As the work fell through the cracks, the process was bogging down. Moving away from needing approval for those things cuts down on this busy work and reduces game bloat long term.

I still want special projects, black ops, experiments, slush funds, bribe funds, informant funds and other creative ways of getting the company to pay for your goals. I know it was easier to be corrupt with your taxi expenses, but hopefully you don't lose sight of the bigger corruption picture thats available. :)