A study on Withmore City's demographics
Because I have free time.

Withmore City exists in a giant, mirror-like glass dome. According to the wiki, the diameter of the initial build is 17 miles wide, which is the distance from an end of the dome to the exact opposite end. For the sake of simplicity, and based on currently available illustrations, we will assume the dome is a hemisphere, e.g. a spherical shaped dome, so the dome is also 8.5 miles tall.

Withmore is divided in four levels, Red, Gold, Green, and Blue. That means we can assume each level is 2.125 miles apart, or these miles tall (if they are evenly divided, which seems like the most logical approach from a structural point of view).

Using this tool (https://www.monolithic.org/calculators/dome-calculator) we can calculate the radius of each level of the Dome (remember the radius is half of the diameter. So in Red, its diameter is 17 miles, in Gold it's 16.46 miles, and so on).

We can picture each level being a "layer" in a cake, where each layer is smaller than the previous one as they go up, due to the spherical shape of the dome. Using the classic formula (A = PI * (d/2)^2) we can calculate the area in miles for each sector, based on the radius we've just calculated.

This aspect has the most variables because it's hard to reach a consensus of how many people live in Withmore City's various sectors. We know the base population is around 75 million people. Not to mention that there are no residential buildings in Gold, so its population is highly transactional. However, after discussion with some staff and members, I am proposing the following ballpark numbers:

Red: 50 million inhabitants. Pretty much everyone lives here, and it's the focal point of immigration.

Gold: 14 million inhabitants. As people come and go to work from Green and to Gold, Gold has at least ten million people in it at any given time. Consider a few more Mixers which go to Gold for banking and cloning.

Green: 10 million inhabitants. If you work for a corporation you live here. Assuming people go to Gold to work and come back to Green to sleep both for day and night shifts it makes sense to have the same amount of people in Green as there are in Gold.

Blue: 1 million inhabitants. Let's say 1% of the population lives in Blue. The percentage may be even smaller, but at 1%, we have 0.75 million, rounding it to 1 million.

This is the easiest part of our calculation. Simply divide the area by the amount of inhabitants and you have an amount of inhabitants per square mile, which can be compared to readily available data online. As of 2019 the most dense city in the world is Manila, Philippines, with a density of 107,561/sqmi, of 1,652,171 inhabitants for an area of 16.55 sqmi. We can also compare it to New York City, in NY, with a population density of 27,016.3/sqmi, according to Wikipedia.

Gold would be a sprawling business center, with extremely dense population of pedestrians and vehicles in the streets, like Manhattan on steroids.

Green would also be dense, parks sprawling with people and children, a suburb with heavy traffic.

And Blue would be a sparsely populated, albeit immensely wealthy suburb, where only the rich are allowed to live.

I like what you have done, however I'd argue it wouldn't be a hemispherical design. Although the dome could potentially be pressurized it has some major holes at the various entry and exit points, on top of dealing with the size and such that would make it so living on Blue would be lethal (44,880' which is higher than the ceiling of a commercial jet). Furthermore, the next highest level would be equal to 4 Burj Khalifa's, the tallest building in the world. Considering you can spot certain landmarks from viewpoints in the dome, I'd say it would need to be a much squatter design. Considering the highest city is 13,615', I'd say the dome would make more sense if it was 3x lower which would make each sector a little taller than the tallest building.
By Varolokkur at May 8, 2019 12:36 PM

This is really cool! I was just thinking about this while wandering in a space that surely had eyes, but few enough to make me wonder how many? (Obviously the answer is irrelevant and one eye is enough.)

Central red (depending on the amount of space it counts for) could cut the visible population down by like 1/9th if I'm doing this right.

I've been reading some of the old BgBB posts and it's really amazing to see how little has changed in Withmore yet how far things have come.

(Side note: I have no idea where to put this, but y'all may wanna remove the rape reference from the website's Newbie page in the history section. Yes it's talking about writing a history but I feel like it sets a tone that doesn't exist IG. Also 2nd side note: making the example @naked be Groin was what detracted me from writing any nakeds.)

This is so impressive! Thanks villa. It really helps drive home how overcrowded Red is in particular.
By Crooknose at May 8, 2019 2:58 PM

I like what you have done, however I'd argue it wouldn't be a hemispherical design. Although the dome could potentially be pressurized it has some major holes at the various entry and exit points, on top of dealing with the size and such that would make it so living on Blue would be lethal (44,880' which is higher than the ceiling of a commercial jet). Furthermore, the next highest level would be equal to 4 Burj Khalifa's, the tallest building in the world. Considering you can spot certain landmarks from viewpoints in the dome, I'd say it would need to be a much squatter design. Considering the highest city is 13,615', I'd say the dome would make more sense if it was 3x lower which would make each sector a little taller than the tallest building.

Though it may not be feasible or what is truly happening or happens, the ideal thing of the Dome would be that each Level is independently pressurized to one atmosphere, just like the weather and day/night cycles of each sector is independently controlled.

As a GM, I very much like this breakdown. Sometimes it is hard to help people understand how crowded the Dome it. Why ambient population matters so much. Here's a photo I found that probably illustrates what your average alley in Red looks like... when things are a bit slow. 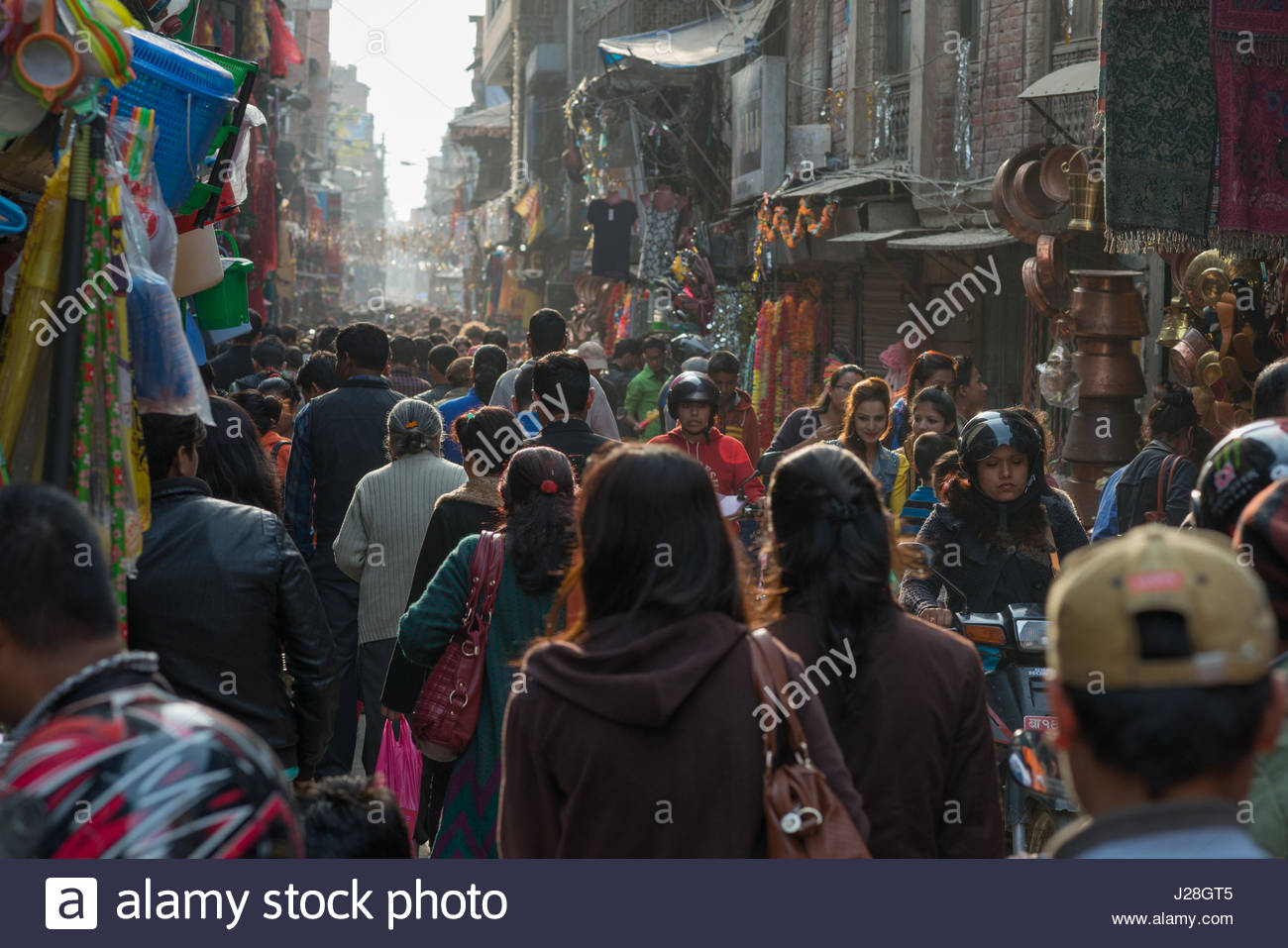 I know that probably indicates the market with its labyrinthine layout and the sheer amount of ambient NPCs, but I'm just imagining a Chex cab plowing through that crowd with reckless abandon now...
By Cinder at May 13, 2019 5:21 AM

I wonder how street combat works with the ambient crowds, honestly.

That's how I imagine combat working between fists, knives and guns. You have someone push through a crowd and discretely pull a knife, the target tries to draw their gun but gets jostled, grabs the assailants hand before the blade sinks in too deep, next thing it's a ugly struggle in the middle of a crowd as panic sets in, bullets flying wild, hopefully hitting the intended target.
By Varolokkur at May 13, 2019 7:34 AM

If you watch real flicks of people fighting in a crowded area, crowd tends to pull themselves away from a fight.
By Beepboop at May 13, 2019 8:11 AM

Yeah but if you look at the picture that Mobius posted and that's on a slow day.. where are they gonna pull away to? There is literally no space lol.
By Rangerkrauser at May 13, 2019 8:11 AM

I can see that the spot under awnings are vacant and the walls are untouched, people can easily huddle away, I think.
By Beepboop at May 13, 2019 8:15 AM

The thing is, there is a lot of confusion when that happens, it takes a moment for people to realize there is a fight going on. You also need to factor in that somewhere around 70% of people in stressful situations will respond by freezing, 20% will think clearly, and 10% will panic.
By Varolokkur at May 13, 2019 8:21 AM

Yeah I agree with Varolokkur. People getting trampled to death in panic is pretty realistic.
By Rangerkrauser at May 13, 2019 8:28 AM

I think that image is perfect and really aligns with how I imagine what the crowds in Red are like.

The density of the crowds is really the only way that the average, non-gun using combatant is going to have any chance against someone with a firearm. If there was any sort of free space to work with, the person with the firearm could just back peddle and empty the magazine.